Our domaine is located in the center of the picturesque village of Ammerschwhir, in the heart of the Alsatian vineyard on the famous “route des vins” (wines route). Long renowned for its great wines, thanks in particular to the microclimate it enjoys, the village is the cradle of the Kaefferkopf hillsides. With its 450 ha of vines and its 40 winegrowers, the village is today one of the great wine-growing municipalities of the Haut-Rhin.

We are a family-owned wine business on a human scale.We operate 14 ha of vines within a radius of 2 km around the village. We only offer wines from our own harvest. We produce the entire range of Alsatian wines and sparkling wines and also have the great privilege of operating parcels on 3 of the 51 Alsatian Grands Crus: Kaefferkopf, Schlossberg and Wineck-Schlossberg. This allows us to offer our customers a nice sampling of the diversity of products which make Alsace so rich. 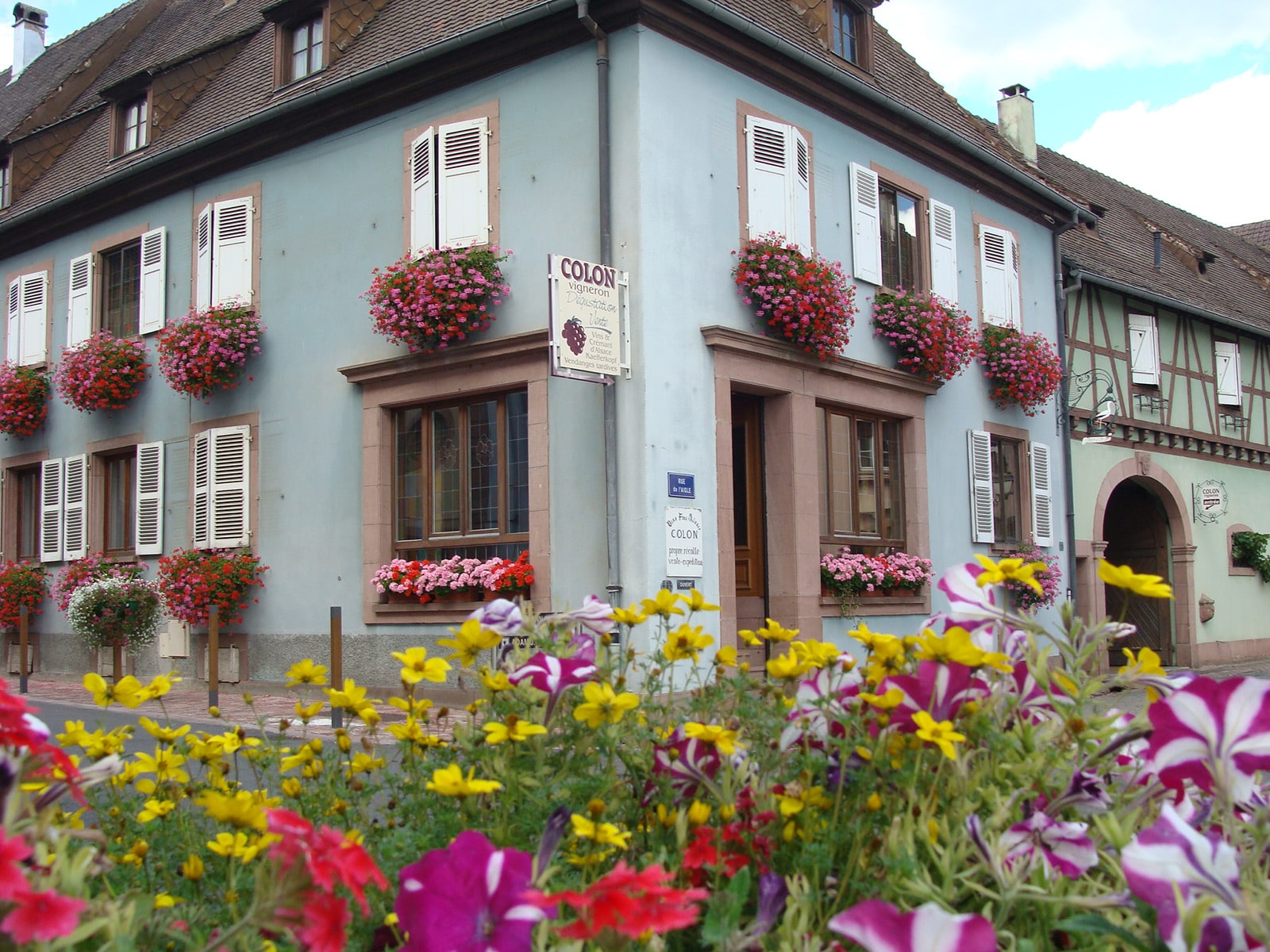 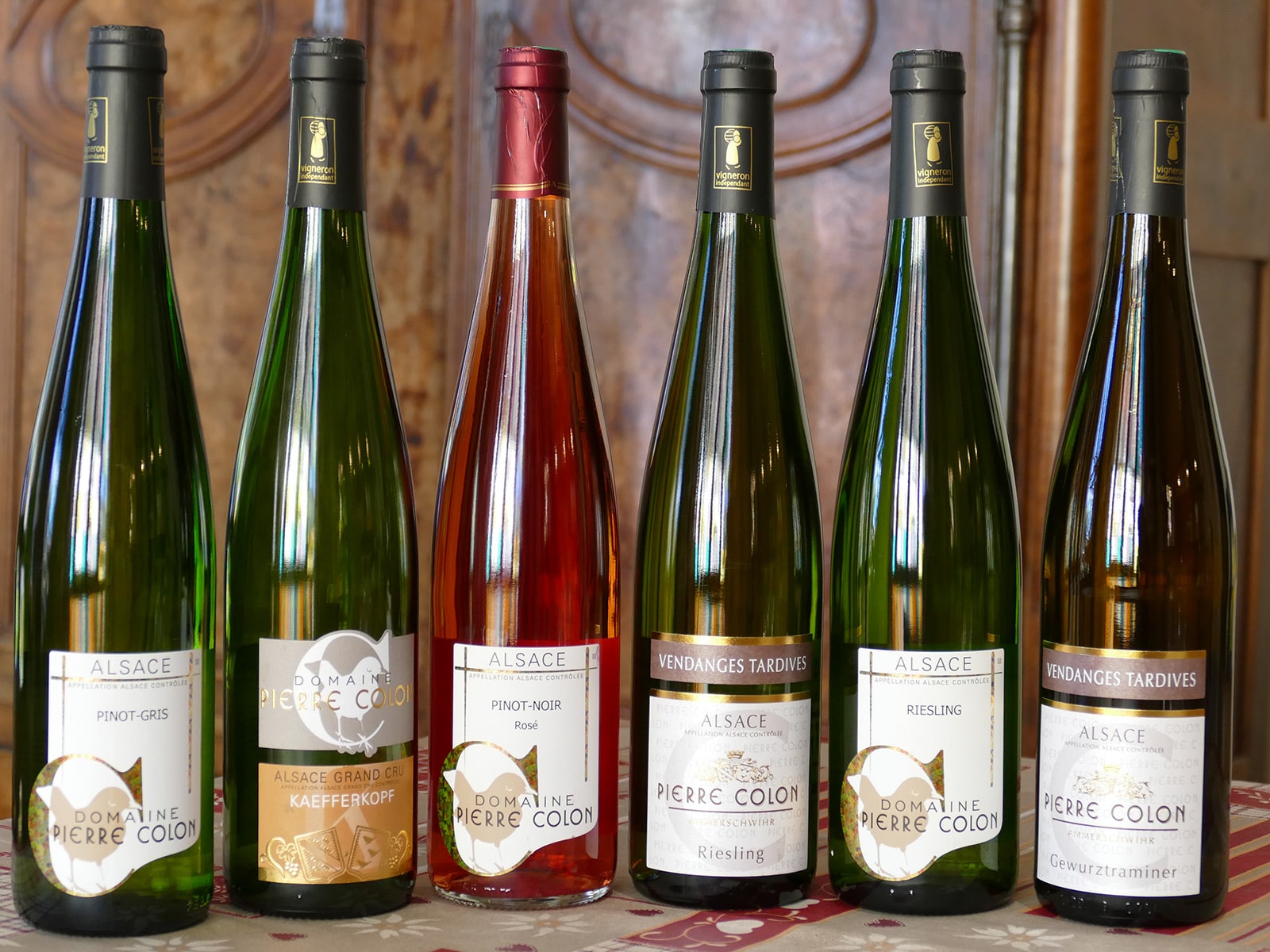 Our parcels are grassy and we practice a responsible farming method with a limited use of phytosanitary products.

In search of perfection and aware of economic realities, we adapt to each vinification using modern equipment and techniques.

The grapes are either harvested by hand or by machine depending on the situation.The “vendange”, or grape harvest, is carried out according to the ripeness and health of each parcels. The grapes are gently pressed with pneumatic membrane presses to extract the best aromas.

The vinification is carried out by us, in a modern cellar exclusively in stainless steel vats with rigorous monitoring of the process and with the help and advice of qualified oenologists.

THE HISTORY OF THE FAMILY

Occupied since Roman times, Ammerschwihr is first mentioned in 869 as “Almarici Villare” or “Village of Almarich”.

In 1367, Ammerschwihr was raised to the rank of town by the joining with the neighboring villages of Meywhir and Katzenbach. The town was fortified during the 14th century.

The new town was then under the jurisdiction of three seigneuries: the one of Kaysersberg, which depended on the Empire, and the ones of the lords of Ribeaupierre and Holandsberg, who both reported to the House of Austria. Each lord was in charge of one of the three city gates and received a contribution of money and wine.

The town had its architectural golden age in the 16th century. In the 17th century, the 30-year war brought its procession of misery and the town came under the protection of the King of France.

In December 1944, 85% of the town was destroyed during the terrible fighting in the Colmar Pocket. Its great architectural richness, as shown in a number of old photos, was irretrievably lost.

On December 31 of the same year, the population who had taken refuge in the cellars was evacuated.

The town was reborn from its ashes in the 1950s, thanks to the skill of the architect Gustave Stoskopf.

Today, Ammerschwihr is a picturesque village in the heart of the vineyards and is one of the largest wine-growing towns in the Haut-Rhin.